A-Z walks, the sixth through thirteenth. 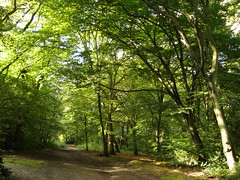 Gosh, it's been a while since I last posted about the A-Z walks. I'm still doing them, and still enjoying them, but have felt disinclined to post about them for fear of being boring — I don't find travel writing in general very interesting at all, and so have never bothered to try to become good at it.

I like maps, though. I've made a Google Map[0] of the route so far. I reckon it's reached that stage which is so pleasing in any project — the point where a ridiculous idea begins to look entirely plausible.

Today's walk was intended to be from Stanmore Station to Hatch End Station; unfortunately I got a bit lost while navigating the Bentley Priory Open Space, ran out of daylight, and decided the wisest thing was to cut it short. I'm now wondering if I should perhaps put these walks on hold until the days are longer again, since the next several are going to involve cross-country trekking, with all the associated getting-lost potential, and it's so dispiriting to have my fun cut short by dusk.