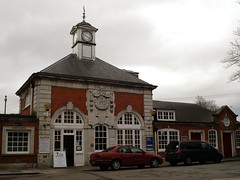 As mentioned, I put the A-Z walks on hold over the winter, since I'd reached a fairly rural area and I wanted to wait until the days were a bit longer so I could enjoy them properly. Anyway, I now declare it officially Spring in England, since I did the first A-Z walk of the year yesterday.

The previous walk ended at a bus stop on Brookshill, a little south of Harrow Weald Common, so that's where this one started, with a pleasant stroll across some farmland and down to the Uxbridge Road. Top marks to the landowners here — they'd put helpful signs wherever the route of the public footpath might have been in doubt.

An uneventful distance west along the Uxbridge Road next, with a stopoff to photograph Hatch End Station, and another to sample a half of beer in the Moon and Sixpence, and then a cutoff north onto a section of the London Loop, where I managed to fall over in the mud; luckily, after I'd got through Pinner Wood, I found a kind homeowner who let me borrow his garden hose to sluice myself off a bit.

I squelched my way down Pinner Hill and onto Joel Street, where I sneaked into the William Jolle, hiding my still-muddy bits, to meet

mjg59. While we were enjoying the decent enough range of beers, I spotted a huge chunk of mud that I'd overlooked, so popped into the ladies' to wash my trousers off properly and dry them under the hand drier. There are now three Northwood Hills residents who've seen me in my knickers.

We followed this with a good dinner at Yummy Tai Chi, and a couple more pints (with accompanying Bollywood videos) at the Northwood Hills, and then headed back home on the Metropolitan Line.

At time of writing, Google is refusing to update its cache of the KML file showing the full route so far, but here's one showing yesterday's route alone, and here's the Flickr photoset.

Next up: I've officially finished the second row of the A-Z map now, but in order to keep a continuous line (and sample a couple of Good Beer Guide pubs) I'll be walking from Northwood Hills Station to Harefield.