Northwood Hills Station to Harefield (beginning of the third row). 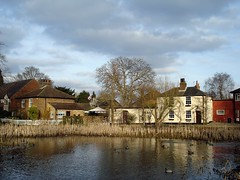 Another A-Z walk, hot on the heels of the last one! This one was just to put me in the right position to begin the third row, which I will be walking from west to east.

mjg59 came along on this one, and it was fun. We met in the William Jolle, once we'd sent each other SMSes and determined that we were all in fact in the pub, just in different parts of it — what did we do before mobile phones?

This one was pretty much all cross-country, apart from an initial short stretch on Pinner Road, which yielded little more exciting than a pub advertising “Xotic dancers”. It got more exciting once we were in the countryside though! We nearly went the wrong way at one point, but luckily we managed to figure out that the houses on our left were there not because they'd been omitted from the map, but because we were going north when we should have been going west.

We even saw horses! Oh, and there was mud, though not as much as last time. Then there was an exotic foreign bus, and finally Harefield itself, where the photographic challenge of the day was to get a shot of the pond (pictured) which included the ducks but excluded the several floating traffic cones.

And then there was a pub, and then another pub that had run out of both real ale and Guinness (and hence urged us to celebrate the "famous Carling St Patrick's Day" with them instead), and finally yet another pub that had both real ale and decent food. And then there was the 331 bus to Uxbridge Station, because Harefield has no station of its own.

The Flickr set is here, and the map so far is here.

Next up: Harefield to (probably) Pinner.

Comments for this post were locked by the author